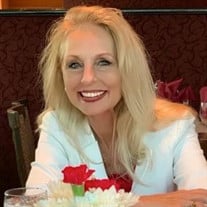 Alicia Evans Vernon passed away November 3, 2021. She was born October 8, 1956 in San Jose, Costa Rica where her parents were missionaries. She grew up in Columbia through 11th grade and then later attended and graduated from Michigan State University class of ‘79. She is survived by her husband Steve Vernon, her two children Alan and Jessica Evans, her to step-children Shannon Wroblewski and Steven Vernon Jr., seven grandchildren, seven great grandchildren and her two sisters Anne and Patty.  She had a heart and passion for making the USA a more beautiful place. She began her political activism in 1995 in Atlanta Georgia as a volunteer lobbyist at the Georgia state capital to advocate for free-market principles and healthcare and health freedom. Between 1995 and 2005 she held many positions in the republican party such as secretary of her congressional district, chairman of her house district and was very involved in many campaigns including that of Newt Gingrich. As the elected secretary of the class of 2005 she not only attended her class‘s year-long training as well as the following year, with the prestigious “Republican Leadership of Georgia”. After moving to Florida in 2011, to care for her parents Norman and Donna Piersma, Americans for prosperity (AFP) asked her to join their team where she was part of the highest rated grassroots District of AFP in the entire United States in early 2014. In June 2015 Alicia began working on her husband‘s campaign and planning their wedding. She continued to be a strong advocate for conservative causes such as pro-life legislation and healthcare freedom. Until her death, Alicia was the chairman of Bradenton Christian Women’s Connection and the regional coordinator for Southwest region of Christian Family Coalition (CFC). She was also the local coordinator for “Protect our Children Project”, participated in Florida citizens alliance advocacy work as well as the Republican Executive Committee of Manatee County. Her favorite hobbies included decorating, long walks on the beach at sunset, snow skiing, gardening, hosting friends and family, and making her community a better place alongside her husband. There will be a Celebration of Alicia’s Life on Saturday, November 6, 2021 at 11:00 am at Maloney Funeral Home, 2401 Cattlemen Road, Sarasota, Florida 34232. Memories and condolences may be left for the family online at www.MFHcares.com.

Alicia Evans Vernon passed away November 3, 2021. She was born October 8, 1956 in San Jose, Costa Rica where her parents were missionaries. She grew up in Columbia through 11th grade and then later attended and graduated from Michigan State... View Obituary & Service Information

The family of Alicia Evans Vernon created this Life Tributes page to make it easy to share your memories.

Send flowers to the Vernon family.