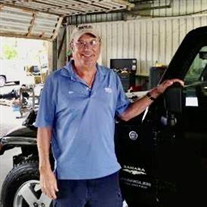 Benjamin Brewington, 77, passed away May 26, 2022. He was born September 3, 1944 in South Clinton, Sampson County, North Carolina to the late James and Sallie Brewington. Benjamin came to Manatee County in 1972 from Mt Clemens, MI. He worked as a paint and body man at Hillard Pontiac Cadillac until he opened Brewington’s Carpet in 1979. He then decided to go back to Auto Body business in 1982. Ben owned and operated Ben’s Auto Body for 40 years. Benjamin and his wife, Sandie, raised two great sons as well as a couple extra sons, Chad and Guy Neal, that he called his own. Ben was known for his crazy adventures and ability to get into mischief. He was one of a kind. You could always rely on him for a great story and a laugh. Ben loved all his family immensely. After Ben lost his wife, Sandie to cancer, he found love again with Nancy Brewington. Ben and Nancy had great love for their grandchildren and would often take them on great adventures. Ben loved to travel, go boating and have a good time. It wasn’t a party until Ben arrived. He was always the life of the party. Left to cherish his memory are his sons, Kevin Brewington and daughter-in-law Buffy Brewington of Palmetto; and son Brian Brewington of Bradenton; brothers, Elvin Brewington and his wife Reta Brewington of Hope Mills, NC: and Ralph Brewington and his wife Diana Brewington of Fayetteville, NC; grandchildren, Brittany, Landen, Nicole “Nicky” Brewington; and great granddaughter, Addison. There will be a celebration of Benjamin’s Life to be held on Saturday, June 4, 2022 at 11:30 am at Sea Breeze Park, 55 Horseshoe Loop Road, Terra Ceia, Florida 34250. Come comfortable and wear shorts! Memories and condolences may be left for the family online at www.MFhcares.com.

Benjamin Brewington, 77, passed away May 26, 2022. He was born September 3, 1944 in South Clinton, Sampson County, North Carolina to the late James and Sallie Brewington. Benjamin came to Manatee County in 1972 from Mt Clemens, MI. He worked... View Obituary & Service Information

The family of Benjamin Brewington created this Life Tributes page to make it easy to share your memories.

Send flowers to the Brewington family.