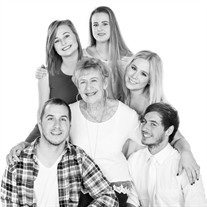 Bernice Mae Bachar, 83, passed away July 28, 2020. She was born October 21, 1936 in Chicago, Illinois to the late Ben and Mary (Lemonds) Warneke. In addition to her parents, she is preceded in death by her husband George Bachar; daughter, Denise Wolfson; and sister, Marie Hess. Dancing was something that George and Bernie loved doing together. And they were great at it. They were always the first ones on the dance floor and the last ones to leave. They also really enjoyed traveling. They traveled all over the world. George came down to Florida in 1974 by himself and bought the Charthouse Pub restaurant (which is now called the Dry Dock on Longboat Key) and a house without discussing it with Bernie first. He called her before heading back to Chicago and said "pack up everything we are moving to Florida and oh by the way I bought a restaurant." They knew nothing of the restaurant business! But that was typical George flying by the seat of his pants and Bernie was always willing to go along for the ride. It was a whole family business all three of their children worked there with them around school. They owned it from 1974 to 1988. Bernie then started her insurance sales career with AmeriLife in Sarasota, much later in life. She discovered that she had a real knack for sales. When you combine that with her ability to relate so well with her clientele, she became one of the most successful agents and awarded as such, 20 years running. Left to cherish her memory are her son, Craig Bachar and his wife Danielle of Osprey; daughter, Lisa Bachar of Peachtree City, Georgia; sisters, Dolores Friese of Sheboygan, Wisconsin and Shirley Rahn of Sarasota; grandchildren, Camryn and Kaitlyn Koontz, Devin Bachar, Christopher Bachar and his wife Andrei, Alyssa Miller and her husband Alex; and great grandsons, Oliver and Logan Bachar. There will be a Celebration of Bernice’s life to be announced at a later date. Memorial contributions may be made in Bernice’s honor to the American Cancer Society online at www.cancer.org. Arrangements are being handled for the family by Maloney Funeral Home. Condolences and memories may be left at www.MFHcares.com

Bernice Mae Bachar, 83, passed away July 28, 2020. She was born October 21, 1936 in Chicago, Illinois to the late Ben and Mary (Lemonds) Warneke. In addition to her parents, she is preceded in death by her husband George Bachar; daughter,... View Obituary & Service Information

The family of Bernice Mae Bachar created this Life Tributes page to make it easy to share your memories.

Send flowers to the Bachar family.