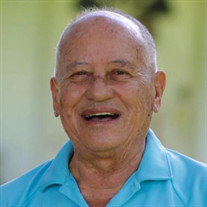 Carlos Alfredo Ballesteros, 83, passed away May 16, 2020. He was born February 9, 1937 in Callao, Peru to the late Enrique Ballesteros and Cristina Portal. In addition to his parents, he is preceded in death by his son, Jose Luis; daughter-in-law, Wanda; and brother, Jaime. Carlos came to the United States from Peru in 1971. He settled in New York and eventually moved to Sarasota in 1984. He was very active in ministries. He organized the Procession Señor de los Milagros for many years at several churches with his most recent celebration taking place at the Church of the Redeemer in October 2019. He owned a janitorial service and also started a local Spanish language magazine, La Voz Hispana, which benefited the community businesses for several years. Carlos spent much of his life in service to others. He was active in Peruvian social clubs and community services such as relief efforts for Peru, local bike donation drives for children and feeding the hungry to name just a few. In the early 2000’s, he was awarded the Key to the City by Sarasota’s mayor, a service recognition award from the Peruvian Counsel in Tampa and also received an award from the former United States Attorney General, Janet Reno. Carlos loved spending time with his family, fishing, tending to his animals and organizing the Procession Señor de los Milagros as well as managing his soccer team, Sport Boys del Callao. Left to cherish his memory are his wife of 61 years, Lucha; sons, Carlos “Johnny” Ballesteros and Pier Ballesteros and his wife Dori; favorite daughter, Janet Maxham and her husband Jason; grandchildren, Giselle, Alissa, Airika, Ashton, Jessie, Jake and Jalyn; great grandchildren, Caylee, Lewis, Giana, Logan and Roman; sisters, Teresa Blancas Ballesteros, Nancy Ballesteros, Maruja Ballesteros and Anna Ballesteros; brothers, Enrique, Roberto and Carlos Enrique Ballesteros as well as many friends. There will be an informal gathering in Celebration of Carlos’ Life to be announced soon. Arrangements are being handled for the family by Maloney Funeral Home. www.MFHcares.com

Carlos Alfredo Ballesteros, 83, passed away May 16, 2020. He was born February 9, 1937 in Callao, Peru to the late Enrique Ballesteros and Cristina Portal. In addition to his parents, he is preceded in death by his son, Jose Luis; daughter-in-law,... View Obituary & Service Information

The family of Carlos Alfredo Ballesteros created this Life Tributes page to make it easy to share your memories.

Send flowers to the Ballesteros family.