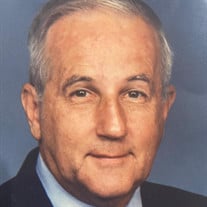 Charles Harrison Miller, Sr., passed away October 14, 2021. He was born January 13, 1929 in Norwell, Massachusetts to the late Spencer and Lillian Miller.   Charles served in the US Navy and came to Sarasota in 1954 from Norwell, Massachusetts. He was a Christian and a gifted entrepreneur and contractor in glass and aluminum business. He owned Miller glass service for 30 years and at one time held the world record for the largest gray glass ever installed in the United States. He was a founding member of the Sarasota Sheriffs Mounted Horse Posse and he ran for Sheriff back in the day.  His passion was his family, but he enjoyed boating and his horses as well. He was an avid pilot of both single engine land aircraft and helicopters. He brought aviation to the Sarasota and Manatee Sheriff’s departments. Charles leased his helicopters to both law enforcement offices. He had two of the helicopters configured as air ambulances for their use as well.  Charles and Patricia had a deep love of the island of Vinalhaven, Maine and all the people on the island. They owned the E. G. Carver & Son grocery store and the Candlepin bowling alley on the island. They are missed dearly by the people on the island.   Left to cherish his memory are his sons, Charlie Miller, Jr. and his wife Betty; James Miller; his sister, Nancy Bennett and his brother, Nelson Miller; his grandchildren, Jessica and her husband Matt DeLoach ,Caitlyn Miller, Shannon Young and Joshua Carter.  Charles leaves behind 7 great grandchildren, Amanda McConnell, Lily, Ansley and Claire DeLoach and Ellie Rogers Kenzie and Bryson Miller.    In addition to his parents, Charles was predeceased by his wife Patricia; daughter Susan; brother Spencer Jr; brother Avery, granddaughter Christy; and grandson Christopher Miller, Jr.   There will be a graveside service with Military Honors to be held on Monday, November 1, 2021 at 1:00 pm at Sarasota National Cemetery, 9810 SR 72, Sarasota, Florida 34241.  Memories and condolences may be left online at www.MFHcares.

The family of Charles Harrison Miller Sr. created this Life Tributes page to make it easy to share your memories.

Send flowers to the Miller family.