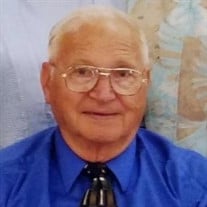 Dale E. Aschliman, 88, of Sarasota passed away May 7, at Manor Care Sarasota. Dale was born in Bennett’s Switch, Indiana June 11, 1932 to Samuel & Anna (Plank) Aschliman being their 9th child. The next spring the family moved to Converse, Indiana. The next move was to Archbold, Ohio. The family moved around where Sam could find work to support the family. Dale graduated from New Paris High School and was attending Goshen College in Goshen, Indiana, when he met Pat Treesh. They were married May 21, 1952 and lived in Goshen. Dale owned and worked a marl pit (a soil sweetner used by farmers) with his father and brother John. Their two daughters, Cathy and Sherry were born while living in Goshen. The next year they bought a trailer and lived in New Paris next to Dale’s parents. After another year they all moved to Venice, Florida. Dale went into the tv repair business with a friend. They moved their trailer to Pine Craft, Sarasota where they were living when Brian was born. Two years later they sold the trailer and moved into a house on Beneva Road while building a house on New York Avenue. They moved to Camphor Avenue 3 years later and Dale went to work with a friend Fran LaGasse building pools. Later Dale started his own pool company, Viking Pools. Their fourth and last child, Craig, was born in 1965. While the family was growing up Dale served as president of the parent teacher organization at Brentwood Elementary, coached Little League Baseball for at least 8 years. He helped start Bethel Mennonite Church about 40 years ago. Dale’s last job was with Teak Decking Systems repairing tools for 18 years. After retiring he served on the board of his homeowner’s association for about 8 years. He was famous for his holiday dinners. He would get up at 6 am, bake 9 pies from scratch of custard, pumpkin, apple, cherry, chocolate, turkey, ham, steamship round roast beef, noodles, mash potatoes, corn, dressing, gravy, creamed onions, yams, cranberry sauce and tapioca pudding. All ready by 1 pm. Over the years he served anywhere from 15 to 25 relatives and friends. He is preceded in death by his parents, siblings, Ada, Rose, John, Mary, Ervin, Dorothy, Walter, daughter, Sherry Gebhart and son, Brian Aschliman. He leaves behind his loving wife, Pat of 69 years, a daughter Cathy Hollar (Mitch), son Craig Aschliman, 7 grandchildren and 15 greatgrandchildren and 3 sisters, AnnaBell Emmert, and Betty Lambright both of New Paris, Indiana, and Carolyn Stephens of Venice, Florida. There will be a Gathering on Sunday, May 23, 2021 from 2 to 4 pm outside at Fruitville Park, 906 Richardson Way, Sarasota, Florida.

Dale E. Aschliman, 88, of Sarasota passed away May 7, at Manor Care Sarasota. Dale was born in Bennett&#8217;s Switch, Indiana June 11, 1932 to Samuel & Anna (Plank) Aschliman being their 9th child. The next spring the family moved to Converse,... View Obituary & Service Information

The family of Dale E. Aschliman created this Life Tributes page to make it easy to share your memories.

Send flowers to the Aschliman family.