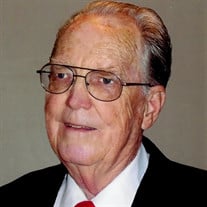 Earl A. Johnson, 95 of Sarasota, Florida previously a longtime resident of Kinderhook, NY and Deland Florida, died Wednesday morning, August 18, 2021, at Sarasota Memorial Hospital after a brief illness. He was born in Schenectady in 1926, son of the late Erling and Cecilia Johnson. After serving in the US Army during World War II in the European Theater (France and Germany), he studied music at Ithaca College. He then went on to teach music at the Ichabod Central School District (and its predecessor) from 1951 through 1981. He also served as the chairman of the music department. Upon retirement he continued his love of music as an accomplished musician, teacher, choral director and piano tuner. Even until a few weeks ago, he was often found playing the piano where he resided at Alderman Oaks in Sarasota. Earl was a longtime member of the Kinderhook Reformed Church and served as the choir director for many years. He was also a charter member of the Sleepy Hollow Barbershop Chorus and the Greater Albany Barbershop Chapter (Kinderhook, NY), as well as the Director of Great Expectations (Deland, Florida). He will forever be remembered for his appreciative nature, kindness, generosity, devotion to family and incredible musical skills. He was predeceased by his wife, Marjorie Ottman, whom he married in 1946 and his daughter, Linda Johnson-Bancroft. Survivors include his sons Mark (Lauren) Johnson of Sarasota and Kevin (Margaret Hover) of Chatham, NY, and his daughter Susan Buniak (Kenneth) of Clifton Park, NY. He is also survived by grandchildren, Amy (A.J.) Menard, Matthew (Sarah) Johnson, Elizabeth (Tim) O’Neil, Madeline Johnson, Alec (Chelsea) Buniak, Scott (Andrea) Buniak, and six great-grandchildren. Also, he is survived by his sister, Margaret Stedwell, and niece, BettyAnn Stedwell, of Dallas, Texas. Earl’s family extends heartfelt appreciation to the many staffers at Alderman Oaks, who cared for and became family to him over the past few years. Earl will be interred at the Kinderhook Reformed Church Cemetery, 21 Broad Street, Kinderhook, New York 12106 on Saturday, September 4th at 11 am. There will also be a memorial service will be held at a future date at Alderman Oaks in Sarasota. Arrangements are being handled by the Maloney Funeral Home, 2401 Cattlemen Road, Sarasota, Florida - mfhcares.com . In lieu of flowers remembrances may be made to the Alderman Oaks Activities Fund (Music), 727 Hudson Ave, Sarasota, Fl 34236 in memory of Earl Johnson.

Earl A. Johnson, 95 of Sarasota, Florida previously a longtime resident of Kinderhook, NY and Deland Florida, died Wednesday morning, August 18, 2021, at Sarasota Memorial Hospital after a brief illness. He was born in Schenectady in 1926, son... View Obituary & Service Information

The family of Earl Alfred Johnson created this Life Tributes page to make it easy to share your memories.

Earl A. Johnson, 95 of Sarasota, Florida previously a longtime...

Send flowers to the Johnson family.