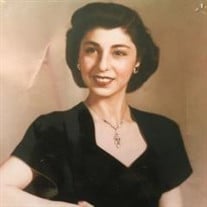 Eleanor D’Amato Carroll, 96, formerly of Islip, New York, passed away on September 3, 2020 in Sarasota, Florida, surrounded by family. Since 2012, Eleanor had been cared for with much love by her daughter, Teresa Reeves, and granddaughter, Christina (Tina) Montiel-Arismendi. Eleanor was predeceased by her husband, Edmund G. (Ted) Carroll. In addition to Teresa and Tina, survivors include her children Eileen, Edmund, Margaret, and Ann, her grandchildren Michael, Jennifer, Nicholas, Robert, Alyssa, Taylor, and Natalie, seven great-grandchildren, daughter-in-law Jill, and son-in-law Kenny. Eleanor grew up in Niagara Falls, New York, the daughter of Teresa and Joseph D’Amato. After graduating from high school, Eleanor attended the University of Buffalo for both college and law school. She was one of only two women in her law school’s graduating class. She did not, however, follow in her father’s footsteps to practice law. Instead, she moved to New York City to pursue her true passion, music. An aspiring opera singer, Eleanor took voice lessons in Manhattan, while working by day at a real estate investment firm. On a blind date, however, she met her future husband, whom she married in 1956. Eleanor and Ted moved to Long Island in 1960, where they raised their five children. A funeral service will be held at St. Mary’s Church in East Islip, New York, on Friday, September 11, 2020 at followed by burial at Calverton National Cemetery. Memories and condolences may be left online at www.MFHcares.com

Eleanor D&#8217;Amato Carroll, 96, formerly of Islip, New York, passed away on September 3, 2020 in Sarasota, Florida, surrounded by family. Since 2012, Eleanor had been cared for with much love by her daughter, Teresa Reeves, and granddaughter,... View Obituary & Service Information

The family of Eleanor Jasmine D'Amato Carroll created this Life Tributes page to make it easy to share your memories.

Send flowers to the Carroll family.