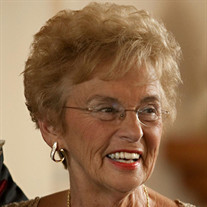 Esther Cook, 88, passed away October 18, 2021 at her home in Longboat Key, FL. She was born February 28, 1933 in Detroit, Michigan to the late John and Isabel (Harrison) Scicluna. A proud first generation Maltese-American, Esther was the fourth of six children. She worked as a secretary at Ford Motor Co. prior to being married. Esther met her husband, the late Fred Cook, through the Ford Employee Thunderbird Ski Club as both were avid skiers. Esther and Fred were married for 22 years before his death in 1992. Following her husband’s death, Esther split her time between Northville, MI and Longboat Key, FL, and eventually moved to FL permanently in 2013. Esther spent much of her free time in service to her church. She was active in the St. Mary, Star of the Sea Women’s Guild, and spent many hours decorating Christmas trees for the annual Christmas Bazaar and making rosaries to be given out as part of the church’s outreach program. Esther also enjoyed special dinners and trips to the symphony, often with friends from church. Esther was preceded in death by her husband Fred Cook; her parents; brothers Joseph, Robert and John; and sister Emily Volino. She is survived by her son and daughter-in-law, Fred and Martha Cook; her grandchildren, Georgette and Freddie Cook; her sister, Isabel Johnson; sister-in-law, Theresa Scicluna; brother-in-law, Nicholas Volino; and many nieces and nephews. A Memorial Mass will be held at 10:30AM on Friday, October 29, 2021 at St. Mary’s Star of the Sea Catholic Church, 4280 Gulf of Mexico Drive, Longboat Key, Florida 34228. Interment will immediately follow in the church’s memorial garden. A Celebration of Esther’s Life will be held in the parish hall following the mass. Memories and condolences may be left online at www.MFHcares.com. The family asks that in lieu of flowers, donations be made in Esther’s name to St. Mary, Star of the Sea. A Memorial Mass will be held in Michigan later in 2021.

Esther Cook, 88, passed away October 18, 2021 at her home in Longboat Key, FL. She was born February 28, 1933 in Detroit, Michigan to the late John and Isabel (Harrison) Scicluna. A proud first generation Maltese-American, Esther was the... View Obituary & Service Information

The family of Esther Cook created this Life Tributes page to make it easy to share your memories.

Send flowers to the Cook family.