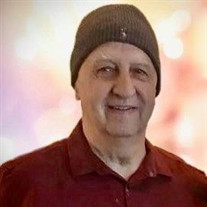 Frank Joseph Prizio, Jr., 79, passed away April 23, 2021.  He was born March 13, 1942 in Worcester, Massachusetts to the late Frank Sr. and Catherine (Lavanga) Prizio.   Frank was a co-owner of the Regatta Deli in Worcester, Massachusetts which he co-founded back in the 1980’s.  He came to Sarasota, Florida in 2010 from the Dominican Republic and was a member of Beth Messiah.  He enjoyed swimming, playing cards and spending time with his family which he loved dearly. Left to cherish his memory are his wife of 28 years, Rita; children, Christina Prizio (Steve), Maria Prizio (Christopher), Dina Prizio (Robert), Frank Prizio (Kali), Joshua Prizio and Jacob Prizio; brothers, William 'Bill' Prizio (Susan), Ralph Prizio and Joseph 'Joe' Prizio (Edie); 10 grandchildren, Michael, Alexis, Alex, Alex, Sarah, Nicholas, John, Rosie, Rob, Christian & Christian (2 of them); 2 great-grandchildren, Isabella & Lucia In addition to his parents, he was predeceased by his daughter, Angela Prizio (George); and sister, Rose Prizio.   There will be a visitation on Friday, April 30, 2021 from 9:00 to 10:00 am at Maloney Funeral Home, 2401 Cattlemen Road, Sarasota, Florida 34232.  Funeral will begin at 10:00 am followed by interment in Venice Memorial Gardens.  Memories and condolences may be left online at www.MFHcares.com.

The family of Frank Joseph Prizio created this Life Tributes page to make it easy to share your memories.

Send flowers to the Prizio family.