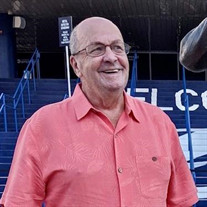 Frederick Oswald Fischer, Jr., passed away October 10, 2021.  He was born December 18, 1950 in Dracut, Massachusetts to the late Frederick Sr. and Roxy (Chase) Fischer.     Fred began his military service right out of high school in 1968 at the young age of 17.  Fred’s father was a 30 year veteran of the USAF stationed at Dover AFB.  Fred joined the Marines and carried out his basic training at Paris Island.  From there he was sent to Cam Lagune in NC for his infantry training and then on to Camp Pendleton for additional training.  He turned 18 years old while serving in Viet Nam. Following his service in Vietnam, Fred was able to visit other countries that were not dangerous including, the Caribbean, Scotland, England and Ireland.  Fred was honorably discharged in 1973 and traveled the states picking up jobs; eventually he settled back in his home state of Massachusetts.     One of Frederick’s sons is a gradute of Florida Southern College in Lakeland, Florida. Frederick and his wife would often travel to Florida to visit him. They would frequently stay on Lido Key which is how they fell in love with the area.  After retiring as a rural letter carrier, and his wife as Postmaster of Sagamore Beach, MA, they decided to spend their retirement in Sarasota.. Frederick enjoyed coin and stamp collecting, and spending time with his family and friends. Some of his fondest memories include traveling to different Sports Hall of Fames with his son Daniel and watching his son John compete in his semi-pro football games.    Left to cherish his memory are his wife of 31 years, Dianna; son John and his children Ellie 16 and Tyler 11, son Daniel Calderwood and his children Levi 5 and Palmer 3 1/2; Frederick's sisters, Jeannett Sharon and Rachel Anderson.    In addition to his parents, Frederick was predeceased by his brother Stephen and his sister Joyce.   Interment with military honors will be on Tuesday, October 19, 2021.     Memorial contributions may be made in Frederick’s honor to the Wounded Warrior Project at www.woundedwarriorproject.org.   Memories and condolences may be left online at www.MFHcares.com.

Frederick Oswald Fischer, Jr., passed away October 10, 2021.  He was born December 18, 1950 in Dracut, Massachusetts to the late Frederick Sr. and Roxy (Chase) Fischer.     Fred began his military service right out of high school in 1968 at... View Obituary & Service Information

The family of Frederick Oswald Fischer Jr. created this Life Tributes page to make it easy to share your memories.

Send flowers to the Fischer family.