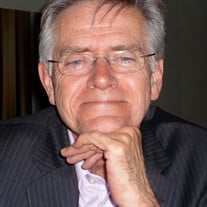 Gary Allen King, 80, passed away on November 11, 2021. He was born November 5, 1941 in Stillwater, Oklahoma to the late Merle Allen King and Helen Lucille (Paxton) King. Gary was a wonderful man, beloved by his family, who led a rich and adventurous life. He studied at Oklahoma State University and received a B.S. in Physiology in 1964 and an M.S. in Physiology in 1966. He then served our country during the Vietnam War, running the First U.S. Army Medical Laboratories in New York City and Ft. George G. Meade, as Chief of Chemistry, Captain. Gary joined Redken Laboratories in 1979 as Quality Control Manager. He stayed with the company for 36 years as it became part of L'Oreal, eventually becoming Director of Product Integrity. In recent years, Gary loved his work as a product liability consultant, assisting counsel in the defense of products including hair care, skin care, cosmetics and fragrances. Gary lived in Oklahoma, New York, Maryland, Florida (where he met his wife Barbara), California (where he raised his family) and New Jersey. He retired from L'Oreal in 2015 at the age of 73. Gary and his wife moved to Lakewood Ranch, Florida where they enjoyed life in their beautiful home. He was passionate about film, and was an avid reader. He loved travel, making many trips to Europe over the years to visit his daughter in London. Gary loved spending time with his grandson. He had a keen interest in history and genealogy. He was a constant source of strength for his family, handling life's challenges with determination and a brilliantly dry sense of humor. Left to cherish his memory are his wife of 49 years, Barbara Joan King, daughter Jennifer Anne King (Hazlitt Eastman) of London, England, daughter Suzanne Nicole O’Kray (Micah O’Kray) and grandson Luke O'Kray, of Parrish, Florida, and sister Merlyn Martin of Burbank, Oklahoma. There will be a Funeral Service on Tuesday, November 23, 2021 in Sarasota. Interment with Military Honors will follow at Skyway Memorial Gardens in Palmetto. Memorial contributions in Gary's name may be left to the Parkinsons Foundation at parkinson.org. Memories and condolences may be shared at www.MFHcares.com.

Gary Allen King, 80, passed away on November 11, 2021. He was born November 5, 1941 in Stillwater, Oklahoma to the late Merle Allen King and Helen Lucille (Paxton) King. Gary was a wonderful man, beloved by his family, who led a rich and adventurous... View Obituary & Service Information

The family of Gary Allen King created this Life Tributes page to make it easy to share your memories.

Send flowers to the King family.