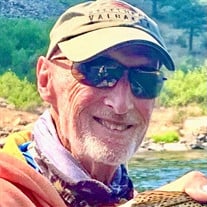 On Saturday June 11, George Kenneth Darling, 77, of Sarasota, FL and Ipswich, MA passed away peacefully surrounded by family and close friends. An avid fly fisherman, golfer and world traveler, George was a devoted husband, father to three children, grandfather to five, and a friend, mentor and brother to everyone.   Born in 1944 to Stella & Kenneth Darling, George spent his childhood years in Fall River, MA alongside his younger sister Susan.  George later attended UMass Amherst where he was a member and President of Phi Mu Delta fraternity. While there he played football for two years on the offensive line protecting NFL great Greg Landry. However, wrestling was his true passion, in which he competed successfully for all four years at UMass and was elected captain for two seasons. His legacy and passion for the sport have been passed down to his son and three grandsons who all now proudly carry on this tradition.   After UMass, George joined the sales division of IBM becoming a successful banking industry salesman. At IBM, George forged his interest in the banking industry, solidified life-lasting sales skills, and developed deep-rooted beliefs in the respect for the individual and treating employees as family.   George’s experience in banking continued with Coopers and Lybrand and as an executive at the Provident Institution for Savings in Boston where he discovered his passion for asset/liability management, thus changing his trajectory forever.  Working with a software engineer, George founded Darling & Associates and in the early ‘80s creating the hallmark asset and liability management system for the banking industry known as BASIS, which would later be sold to SunGard Data Systems.  Believing that data and software would change banking strategy, George founded Darling Consulting Group (DCG) in 1991 with four colleagues, all of whom remain at DCG to this day in Newburyport, MA.  Under George’s leadership, DCG became widely known, and remains well respected in all corners of the US banking industry.  DCG currently employing over 125 employees and has been acknowledged as a “Top Places to Work” by the Boston Globe for the last seven years. Even though officially retired in 2013, he maintained the Chairman title in homage to his influence at the company.   George was a renowned educator and industry expert in bank balance sheet risk management. He was a  frequent speaker and columnist for national and state trade associations, banking regulatory agencies, the Federal Home Loan Bank System, and a broad array of banking industry trade publications, such as The American Banker.  George traveled abroad and throughout the United States contributing greatly to the banking industry.   George’s many interests were as unique as he was,  and all were pursued to the fullest. He became an obsessed marathon runner with the North Shore Striders, drove his family crazy with his sourdough starter, loved running his beloved Brittanys for upland birds and, once, after a perceived fruitful duck hunting trip proudly (and quite mistakenly) served a loon to his dinner guests. When he began to take up golf and flyfishing, friends and family were incredulous that these so-called “gentlemen’s sports” could survive his fiery temperament and self-imposed demands for immediate perfection. Anyone within earshot of a missed putt or a lost fly learned very quickly that George had a unique knack for stringing certain words together and creating sentences that could make a veteran drill sergeant blush.   During his lifetime he enjoyed travelling around the globe making friends wherever he went. China, Paris, Munich, Montana, Nantucket, South Africa, British Columbia, Mexico, New Orleans, Hawaii and recently Amsterdam have all been important destinations, and yet nothing compared to coming home to his beloved back deck at the Ipswich Country Club house where he always welcomed friends and family with a generous pour of scotch and a very fine cigar.    George was preceded in death by both parents, his second wife Barbara, and his daughter Robyn. He is survived by his loving wife Patty and her children Sean and Libby, his sister Susan Hinton and her husband Wayne, his devoted son Todd and his wife Marla, son-in-law Jim Dolliver, and his son Andrew. His pride and joy were his grandchildren Jack, Ian, Miles, Jordan and Casey.  George also held a special place in his home and heart for his “German family” Ralf and Andrea Memmel and their children Felix, Corbinian and Mariko, all of whom he loved as his own family.   The family plans to schedule a celebration of life later in the summer and will release a notice of this in the near future. In lieu of flowers, any donations can be made in George’s memory to: The Circus Arts Conservatory of Sarasota (circusarts.org) or Anna Jaques Hospital where George served as Trustee for many years (Anna Jaques Community Health Foundation, 25 Highland Avenue, Newburyport, MA 01950 or online at AJH.org/giving) Memories and condolences may be left online for the family at www.MFHcares.com.

The family of George Kenneth Darling created this Life Tributes page to make it easy to share your memories.

Send flowers to the Darling family.