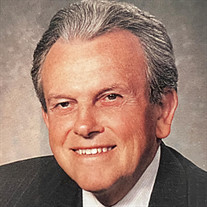 Dr. Gerald Derstine, 93, of Bradenton, Florida, stepped peacefully into glory on Saturday, Feb. 12, 2022. Serving more than 70 years in full-time ministry, he was the founder in 1968 of Christian Retreat Conference Center in Bradenton, and president of Gospel Crusade, Inc., a non-profit worldwide missions organization, for many years. He also was founder and director of Strawberry Lake Christian Retreat in Minnesota, North Country Christian Retreat in New York, and the Institute of Ministry in Bradenton. As director of Israel Affairs International, he established many churches and promoted peace throughout the Middle East. Gerald was a pioneer in the Charismatic Renewal following an outpouring of the Holy Spirit on his Mennonite congregation in 1955. His autobiography, “Following the Fire,” gives his account of the supernatural revival in Minnesota that changed the course of his life and catapulted him into a global ministry. He was noted for his balanced teaching on the Holy Spirit and the Kingdom of God. In addition to his Bible teaching programs on CBN and other TV networks, he was featured on many Christian television stations worldwide. He established numerous churches, including The Tabernacle in Sarasota, authored many books and publications over the years and has left a legacy that will continue to impact millions worldwide. Born in Souderton, Pennsylvania, on Oct. 13, 1928, Gerald is preceded in death by his parents, Willis and Naomi Derstine, and two brothers, Durrell and Willis. Gerald’s late wife of 67 years, Beulah, went to be with the Lord in 2016. He is survived by his wife, Shirley (Nafziger); four children, Joanne Curphey (Bill), Phil Derstine (Jannette), Tim Derstine (Beverly), Steve Derstine (Brynn), 14 grandchildren; Jenifer Derstine, Tanya Gervais (Josh), Cori Edwards (Brian), Lauren Derstine, Amy Johnson (Justin), Michelle Derstine, Michael Derstine, Steven Derstine, Kiersten Hunter (Chris), Charles Hellier V, Stephanie Derstine, Christopher Derstine (Amelia), Avery Derstine, Rylan Derstine; and 12 great-grandchildren. He also is survived by Shirley’s children; Tyler Nafziger, Tony Nafziger (Sandra), Todd Nafziger (Renae) and April Shallo (John); 13 grandchildren and 5 great-grandchildren. A Celebration of Life will be held Sunday, Mar. 27, 2022, at 1 PM in the sanctuary at Christian Retreat, 1200 Glory Blvd., Bradenton, FL.

Dr. Gerald Derstine, 93, of Bradenton, Florida, stepped peacefully into glory on Saturday, Feb. 12, 2022. Serving more than 70 years in full-time ministry, he was the founder in 1968 of Christian Retreat Conference Center in Bradenton, and president... View Obituary & Service Information

The family of Dr. Gerald Derstine created this Life Tributes page to make it easy to share your memories.

Send flowers to the Derstine family.