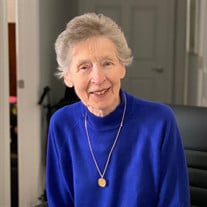 Grete Aerendal Christiansen passed away on March 17, 2022, at the age of 86 at Elan of Manatee in Bradenton, Florida. Grete Aerendal Mikkelsen was born in Odense, Denmark on February 29th, 1936 to Aage & Asta Aerendal Mikkelsen. Grete is survived by her four children and her younger siblings Aage Jr. Mikkelsen and Else Mikkelsen. Her oldest brother Jorgen Aerendal Mikkelsen passed away in 2016. After completing Danish High School Grete trained as a nurse and worked at Rigshospitalet in Glostrup (Hospital) in Denmark as an Operating Room nurse for many years. In 1960 Grete married Arne V. Christiansen, and subsequently had four children: Henrik, Allan, Jacob, and Ann. In 1965 Arne and Grete moved to Maracay, Venezuela as Arne had gotten a job with Sudamtex, a subsidiary of the American company United Merchants out of New York City. Arne and Grete lived in Venezuela until 1982 when the family immigrated to Florida. After raising her family Grete started a Home ACLF “The Island Home”. Grete was blessed with grandchildren by Ann & her husband Ray, (Elizabeth and Courtney), and by Jacob & his wife Yumiko, (Joanna and Katherine). Arne & Grete divorced in 1994, after which Grete met William (Bill) Staubach. They spent 27 years together traveling around the USA in a 38-foot (11.5 meter) motor home, playing Bridge with family and friends along the way, boating/fishing in and around Rotunda, Florida, and cooking Danish dishes for family and friends. They later settled down in Spartanburg, South Carolina. Grete became an integral part of Bill’s family of son William & Cheri, son Brian & Robin, daughter Barbara, and daughter Karen & Paul. Bill passed away in mid-2020 of natural causes, after which Grete moved to Elan of Manatee in Bradenton Florida till her passing on March 17th of 2022. Grete was a strong and intelligent woman, who made all who knew her feel welcomed. Her love for all her family will be missed and we were blessed by her presence in our lives.

The family of Grete Aerendal Christiansen created this Life Tributes page to make it easy to share your memories.

Send flowers to the Christiansen family.