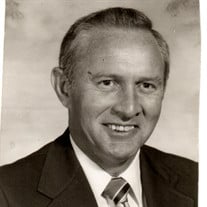 James F. Byrnes, formerly of Bethesda, Potomac and West River, Maryland passed away peacefully at his home in Sarasota, Florida on July 4, 2021. Mr. Byrnes was surrounded by his loving wife of 64 years, Mary Ann (Mackert) Byrnes and immediate family at the time of his death. Son of Mr. and Mrs. Michael J. Byrnes of Frostburg, Maryland, “Jimmy” was the youngest of the Byrnes family. He attended St. Michael’s Parochial School, LaSalle High School (1951) in Cumberland, Maryland and Frostburg State Teacher’s College (1956). He met the love of his life, Mary Ann as she walked home from high school, and it was love at first sight! Byrnes is remembered as a charismatic person who liked to help others, a good friend, strong student, hard worker and an exceptional athlete. During his college years, he lettered in Soccer, Basketball, and Track. Most notable was his competitiveness as a Center Halfback in Soccer earning 4 letters in 4 seasons from 1952-1955. He was recognized as an All-American Athlete (1953) and All-South (1953-1954) in Soccer. In Baseball, he was an outstanding shortstop and third baseman from 1953-1955 earning 3 letters in 3 years. He also played Basketball during his college years. On October 18, 1975, Byrnes was honored as the 22nd Inductee into the Frostburg State Athletic “Hall of Fame” and was celebrated at a Homecoming Game at the renamed college, Frostburg State University. A devout Irish Catholic, Jim was an altar server at St. Michael’s Catholic Church, served on the parish council at Our Lady of Mercy Church in Potomac, Maryland and was a dependable usher at Our Lady of Sorrows Church in Galesville, Maryland. He faithfully attended mass and joyfully served the Lord and his many church communities. Mr. Byrnes began his career in education in 1956 as teacher of English and History at North Bethesda Middle School with Montgomery County Public Schools. Excluding a two-year period of military service in the U.S. Army, he remained on staff at North Bethesda MS until June 1968. Concurrently, Jim was a counselor at Camp Inverness and later was named Camp Director in 1966. In 1968, Mr. Byrnes was elevated to Headmaster of the McLean School, Inverness Campus. His reputation was respected by school leaders in both the private and public sectors throughout Montgomery County. In 1977, Byrnes resigned his position at the McLean School- Camp Inverness and founded The Byrnes School in Potomac, Maryland. The Byrnes School was his passion, stretching the minds and developing the spirits of students in preschool through eighth grade on a beautiful 27-acre property in Potomac, Maryland. The mascot was the eagle, and the school motto RESPECT which modeled the character virtues that Byrnes so deeply valued, Responsibility, Excellence, Service, Perseverance, Enthusiasm, Character, Tenacity. After retiring in 1992, Mr. Byrnes and wife, Mary Ann moved to West River, Maryland and enjoyed a quieter life; boating, crabbing, fishing and enjoying life together with the beauty of the Chesapeake Bay. They relocated to Sarasota, Florida in August 2020. Jim Byrnes will be remembered as a loving brother, loyal husband and devoted father. He is survived by the patriarch of the Byrnes family, Paul, and wife, Hope of Sarasota, Florida; his adoring wife, Mary Ann Byrnes and their children, Mary Lynn, and son-in law, Ralph Fullgrapp of Sarasota, Florida; James F. Byrnes, Jr., and daughter in law, Debbie Byrnes of Rockville, Maryland; Susan Borst of Olney, Maryland; and Kelly Ann Kavounis of Frostburg, Maryland. Jim was loved and adored as “Pop Pop” to ten grand-children and two great-grand-children. The family would like to express their gratitude to Sarasota Veteran’s Administration HBPC, with special thanks to nurse Sandy. We also give thanks to personal caregivers Geranice and Laura for their excellent care of Jim. Memorial contributions may be made to the Parkinson’s Foundation at www.parkinson.org. Condolences and remembrances are appreciated by the family and can be posted at www.MFHcares.com. At this time, funeral plans have not been finalized.

The family of James F. Byrnes created this Life Tributes page to make it easy to share your memories.

Send flowers to the Byrnes family.