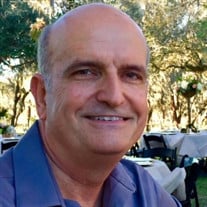 James Roy Shirk, July 5, 1959 &#8211; April 3 2021 Jim was born in Sarasota, Florida and was the youngest of four siblings. When he was a boy, he enjoyed riding his bike all over town and went on numerous adventures. He loved listening to... View Obituary & Service Information

The family of James Roy Shirk created this Life Tributes page to make it easy to share your memories.

Send flowers to the Shirk family.