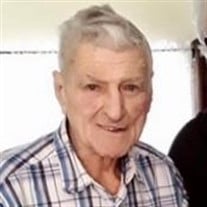 John Stewart Bahns, 96, passed away peacefully on November 12, 2020. He was born the ninth of thirteen children on January 23, 1924 in East Hampton, L.I., NY to the late Frederick and Elizabeth (Meinke) Bahns. In addition to his parents, John is predeceased by his wife MaryAnn (Ryan) in 1988 and twelve siblings through the years. In his youth, John spent much time working on horse and dairy farms in Pine Plains, NY. It laid the foundation for teaching him about the values of hard work and responsibility. John served in the US Navy during WWII aboard Liberty ships which delivered tanks and other supplies. When he returned from the war, he went to trade school and learned the skills to become a floor mechanic. He specialized in installing all kinds of floors and became very highly regarded in his trade. He was an avid golfer during most of his life and also enjoyed bowling. He came to Sarasota with his family in 1967 from Huntington, L.I., NY. In 1990 after the passing of his wife two years earlier he moved to Zephyrhills, FL where he enjoyed many more rounds of golf with new friends he had made there. He lived there for 25 years and returned to Sarasota in 2015 to be closer to his family. In his later years one of his favorite past times was watching and cheering on the Tampa Bay Rays and enjoying more family dinners and celebrations with his children and grandchildren. Through the years, he also treasured his many trips back to New York to visit family and friends. Left to cherish his memory are his daughter, Kathleen Corso and her husband Frank of Sarasota; son, Kevin Bahns of Tacoma, WA; grandchildren, Roseann Brown (Roy) and Daniel Corso (Katie) of Sarasota; Rachel Bahns, of Riverview; Nicholas Corso and Caitlin Otto (Ricky) of Sarasota and Calvin Bahns of Tacoma. Also great grandchildren; Caleb, Leah, Tyler, Skylar, Isabella, Kaia and Grady of Sarasota and Riverview and his longtime companion, Dolores McElwain of Port Jefferson Sta., L.I., NY and her family. There will be a graveside service with Navy Military Honors on Friday, April 2, 2021 at 11:00 am at Sarasota National Cemetery, 9810 State Road 72, Sarasota, Florida 34241. Any donations may be made in his memory to Tidewell Hospice, St. Jude Children's Research Hospital or the DAV.

John Stewart Bahns, 96, passed away peacefully on November 12, 2020. He was born the ninth of thirteen children on January 23, 1924 in East Hampton, L.I., NY to the late Frederick and Elizabeth (Meinke) Bahns. In addition to his parents, John... View Obituary & Service Information

The family of John Stewart Bahns created this Life Tributes page to make it easy to share your memories.

Send flowers to the Bahns family.