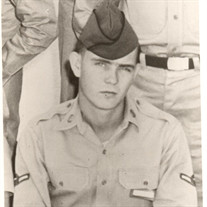 John “Bud” Joseph Donnellan, 84, passed away December 27, 2020.  He was born September 21, 1936 in Benton Harbor, Michigan to the late John and Mary (Cady) Donnellan.   John came to Florida 30 years ago from Fox Lake, Illinois.  He was a Catholic and a member of the American Legion.  For fun John loved to sing Karaoke, dance, fish, boat, water ski and research family genealogy.   Left to cherish his memory are his sons, John Patrick Donnellan and his wife Candace of Venice; Steven Michael Donnellan of Winter Haven; Michael Patrick Sean Donnellan of Tempe, Arizona; sister, Kathleen Przybytek and her husband Jim; nieces, Laura Przybytek and Colleen Gunkel; nephew, Chris Nozicka and his wife, Cheryl; nephew Brian Pryzbytek; grandchildren, John, Matthew and James Donnellan; and great grandchildren, Easton and Emmy Donnellan.    In addition to his parents, John was preceded in death by his sister and best friend, Mary Jo Pantaleo. John served honorably in the United States Air Force from 1956 to 1960 and was stationed on the Western Pacific atoll of Enewetak in the Marshall Islands. There, he and his fellow airmen provided support for the testing and development of the U.S. nuclear arsenal. Near the end of his service, he was stationed at Lake Moses, Washington.   Internment with military honors will take place at Sarasota National Cemetery, 9810 State Road 72, Sarasota, Florida 34241, on Monday, January 4, 2021, at 11:30 a.m.   Memories and condolences may be left online at www.MFHcares.com.  The family requests, that in lieu of flowers, contributions be sent to the Maloney Funeral Home, 2401 Cattlemen Road, Sarasota, Florida 34232.

The family of John Joseph Donnellan created this Life Tributes page to make it easy to share your memories.

Send flowers to the Donnellan family.