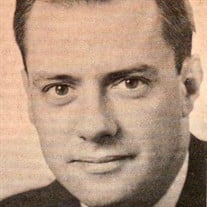 John S. Johnson - devoted husband, father, grandfather, great-grandfather and friend - was called home to Heaven from his home in Sarasota, Florida on April 23, 2022. John was born on October 19, 1930 in New York, NY, and grew up in Greenwich, CT, where he was a longtime resident. He was the son of John and Marion Johnson, and older brother of Susan. An ardent reader and scholar, John finished high school in 1948 at Fairfield Prep in Fairfield, CT, where his study of Latin led to a lifelong interest in medieval and early Church history. He went on to study at Yale University, where, in addition to playing on the Yale basketball team, he pursued his passion for classical and modern history. This passion continued throughout his life, and his large home library represented his many interests, in particular, the poetry and prose of World War I and stories of Ireland and the Irish diaspora. In 1954, he graduated from Yale Law School. After two years of service in the US Navy stationed in Norfolk, Virginia, John began a long and successful career in private and corporate law. Beginning with the firm Chadbourne & Parke, John then joined Anaconda Company in 1964.. He continued his career as General Counsel to Warnaco & AMF, and Lone Star from which he retired in 1995. His love of sports continued throughout his life, and he actively played golf and tennis well into his 80s with family and friends at his homes in Sarasota, Florida and Southbury, Connecticut. John also loved to travel the world and he, along with his beloved wife Terri, took every opportunity to venture far and wide, both in the Americas and over the breadth of the European continent, from Dublin and Rome to Athens and Istanbul. These journeys were taken not only as delightful voyages to foreign lands, but also, at times, as pilgrimages to many sites important to his Catholic faith, a faith which guided and inspired him throughout his life, and now embraces him in eternity. He is survived by his wife Theresa (Terri) Johnson, and his five children Marian, Stephen, Sheila, Gregory and David, as well as thirteen grandchildren and four great-grandchildren. He was predeceased by his two sons Christopher and Eric, and his sister Susan. He is also survived by Terri’s children Thomas, Gary, FJ, Jennifer and Maria.

John S. Johnson - devoted husband, father, grandfather, great-grandfather and friend - was called home to Heaven from his home in Sarasota, Florida on April 23, 2022. John was born on October 19, 1930 in New York, NY, and grew up in Greenwich,... View Obituary & Service Information

The family of John S. Johnson created this Life Tributes page to make it easy to share your memories.

Send flowers to the Johnson family.