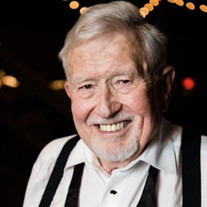 Jonathan Brinton Detwiler, 88, passed away May 11, 2020. He was born February 15, 1932 in Caln Township, Pennsylvania to the late Ralph and Grace (Oberholtzer) Detwiler. In addition to his parents, he is preceded in death by his brother Donald and his grandson Daniel. A graduate of the class of 1949 from Phoenixville Area High School in Pennsylvania, Jonathan went on to excel at the University of Tulsa, serving as President of the Sigma Chi fraternity. Graduating with a degree in Petroleum Engineering from UT in 1953, he remained a fervent supporter of the University of Tulsa, funding an endowed chair to support the school of Petroleum Engineering in 2004. Over a career that spanned 45 years Jonathan Detwiler built a number of businesses in the trucking and marine terminal industry, primarily located in southeastern, PA. and Wilmington, DE. His trucking companies included Truckmen, Inc., P&D Lumber Handling and Kulp & Gordon. On the Marine Terminal side he was sole or majority owner of Christina Services, Trans Cargo, Diamond State Services and AutoPort, Inc. – a provider of export vehicle processing services to US based car manufacturers. He successfully sold many of his businesses to a London based transportation conglomerate in 1998. Outside of his passion for business, Jonathan was an avid outdoorsman and motorhome enthusiast. With Gloria and his faithful Kerry Blue terrier by his side, his wanderlust took him to all corners of North America and points in between as he pursued the freedom of the open road. He and Gloria spent many wonderful summers in Big Fork, MT. on the shores of the Flathead Lake. Jonathan believed strongly in the power of philanthropy and his passion was to help children. He funded numerous scholarships at the Gesu School in Philadelphia which provides children in disadvantaged neighborhoods unique educational opportunities. He was also a strong supporter of Barnstone Art for Kids in Phoenixville, Pennsylvania. An organization dedicated to helping children and teens adapt to stress and adversity. In Oaks, PA, he was a member of St. Pauls Memorial Episcopal Church. In 2015 he came to Longboat Key where he was a member of All Angels by the Sea Episcopal Church. Left to cherish his memory are his wife of 42 years, Gloria; children, R. Paul Detwiler; J. Randall Detwiler and his wife Fern; J. Brinton Detwiler and his wife Lynn; Michelle M. Detwiler; and John Michael Wolf, Jr. and his wife Kerry; grandchildren, Kathryn, Emily, Kirsten, Alyssa and her husband Ehren, Eric, Isa, John III, Erin and Bridget. There will be services to celebrate Jonathan’s life at a date to be announced as soon as people are allowed to congregate again. Memorial contributions may be made in Jonathan’s honor to the Gesu School at www.gesuschool.org/donate or barnstoneartforkids.org/donate. Arrangements are being handled for the family by Maloney Funeral Home. www.MFHcares.com

Jonathan Brinton Detwiler, 88, passed away May 11, 2020. He was born February 15, 1932 in Caln Township, Pennsylvania to the late Ralph and Grace (Oberholtzer) Detwiler. In addition to his parents, he is preceded in death by his brother Donald... View Obituary & Service Information

The family of Jonathan Brinton Detwiler created this Life Tributes page to make it easy to share your memories.

Send flowers to the Detwiler family.