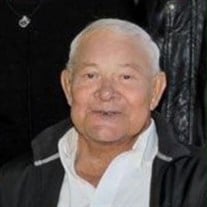 Kermit C. Lehman, 82, of Sarasota, Florida passed away January 16, 2022. He was born March 18, 1939 in Lowville, New York to the late Ezra and Clara (Roggie) Lehman. He attended Country School in Harrisburg N.Y. and Lowville Academy. On October 28, 1960 he married his loving wife, Ann M. Zehr, daughter of the late Lloyd and Sara(Jantzi) Zehr. Ann passed away on January 6, 2000. Kermit was a dairy farmer and he and Ann operated his family's farm in Harrisburg, New York. His Farm had 2 Harvestore Silos on which 1 had printed on it " Kermit Lehman and Daughters". His barn also had a sign that had the same. He and Ann moved to Sarasota in 1985 from Lowville to thaw and enjoy the Florida sunshine. He was a member of the First Mennonite Church of New Bremen in New York. He enjoyed John Deere tractors and his notebook computer. He made many wood farm equipment toys and restored old metal pedal tractors. He loved to visit with people, tell stories and joke. He liked to go to Der Dutchman and Lloyd's of Lowville for coffee. In is earlier years he was an avid snowmobiler. Most of all he loved his beautiful Family. Left to cherish his memory are his daughters, Vicky Lehman, Croghan, N.Y ; Betty Freeman and her husband Kenny, Copenhagen, N.Y; Kelly Hayes and her husband Chris; and Cristy Flagg, both from Sarasota Florida; step brother, Dick Hills and his wife Nancy; step sister, Beverly Kiernan; Sister in Laws; Irene Lehman and Betty Lehman. He is also survived by his Zehr in laws; Marlene Lyndaker, Dave(Connie) Zehr, Don(Carol) Zehr, Kathy Zehr and Dan Zehr. Grandchildren, Doug (Rachel)Freeman, Joe Freeman, Amy (John) Millard, Ashley (Ray) Allen and Erica Flagg; great grandchildren, Gerald, Wesley, Madeline, Jaxon, Charlotte, Everett, Collin and one due any day now. His grandchildren and great grandchildren were the apples of his eyes. He is also survived by many nieces and nephews. In addition to his parents, father and mother in law and wife, Kermit was predeceased by his siblings, Pauline (Richard) Lyndaker, Charlotte (Carl) Clifton, Betty Lajune Lehman, Donnie (Irene) Lehman, Beryl (Betty) Lehman, Roselba (Don) Combs and Meridith; and step brother, Ronnie (Imelda) Hills, brother in law Bob Kiernan and Elton Lyndaker. Donations can be made in memory of Kermit Lehman to Tidewell Hospice 5955 Rand Blvd. Sarasota, Florida 34238 The Funeral for our Dad, Kermit Lehman will be May 14, 2022 at First Mennonite Church of New Bremen at 11am. Burial will immediately follow after the service. A chicken bbq meal will then follow at the Betty and Ken Freeman farm. The bbq is in honor of Dad who loved a good chicken bbq and nothing better but to gather people together to sit and visit. and condolences may be left for the family at www.MFHcares.com.

Kermit C. Lehman, 82, of Sarasota, Florida passed away January 16, 2022. He was born March 18, 1939 in Lowville, New York to the late Ezra and Clara (Roggie) Lehman. He attended Country School in Harrisburg N.Y. and Lowville Academy. On... View Obituary & Service Information

The family of Kermit C. Lehman created this Life Tributes page to make it easy to share your memories.

Send flowers to the Lehman family.