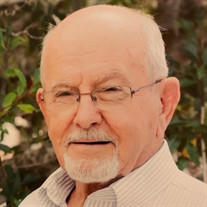 Melvin “Sonny” Shrock, 86, passed away December 12, 2020. He was born October 8, 1934 in North Canton, Ohio to the late Henry and Mary Ann (Miller) Shrock. In addition to his parents, he is predeceased by his brothers, Raymond Shrock and Henry Jr.; and sisters, Sarah, Martha, Emma and Mary. Sonny came to Sarasota in 1973 from North Canton, Ohio and has been a member of Bayshore Mennonite Church since then. He was very active in the church work serving as usher, building cabins at Lakewood Retreat and several trips to Haiti to build orphanages. He enjoyed playing cards, golfing and was a huge fan of his Ohio sports teams, The Ohio State Buckeyes, Cleveland Indians and the Cleveland Browns. Most of all, he loved watching his grandchildren and great grandchildren’s sporting events. He spent many years working for Ammon Schrock Homes and D&S Carpentry. Left to cherish his memory are his wife of 66 years, Mary Ellen (Stutzman) Shrock; sons, Randall Shrock and his wife Gloria; and Rodney Shrock, all of Sarasota, Florida; sisters, Edna Wittmer of Hartville, Ohio and Erma Beachy of North Canton, Ohio; brother, Noah Shrock and his wife Dorothy of Union City, Pennsylvania; grandchildren, Rene Collins (Andy), Jenna Mullet (Scott), Alyssa Woosley (Corey), Erika Iglesia (Samuel) and Tara Correa (Jose); great grandchildren, Madison, Randall, Ashlyn, Hayden, Hudson and Harper. There will be a Memorial Service on Friday, December 18, 2020 at 11:00am at Bethel Mennonite Church, 2985 Bethel Lane, Sarasota, Florida 34240. Memorial contributions may be made in Sonny’s honor to the Gator Boys Wilderness Camp, 44930 Farabee Road, Punta Gorda, Florida 33982. Memories and condolences may be left online at www.MFHcares.com.

The family of Melvin "Sonny" Shrock created this Life Tributes page to make it easy to share your memories.

Send flowers to the Shrock family.