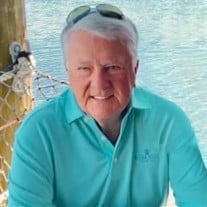 Beloved Husband, Father and Grandfather, Peter Martin, 74, of Alva, Florida, passed away on March 20th, 2022. His loss was completely unexpected, and the family is shocked and deeply saddened. On July 31st, 1947, Peter was born to James and Ruby Martin in Detroit, Michigan. After graduating from Harper High School in 1965, he was drafted into the Army in 1966. He was a proud and dedicated soldier who served valiantly during Vietnam. He returned from the war and studied Business Management at Saint Xavier University in Chicago. After graduation, he landed his first job in the transportation industry as a dockman for Saginaw Transfer, which led to his storied career in the trucking industry. In 1964, he met Francine, and they wed in 1966, going on to have two children, Michael and Jim. Peter was determined to provide for his family and give them the life he felt they deserved. His family meant more to him than anything else, something he often mentioned. He was proud of his wife and children and always tried his best to support them. Peter was also a passionate golfer and could often be found on the course when he wasn't at home. Anyone who knew Peter knew that he was the most loving father and husband a family could ask for. Peter was predeceased by his father James, mother Ruby and brother Jimmy. He is survived by his wife Francine, son Michael, son Jim and his wife, Jessica. Sister Jane Coleman and her husband, Ron. Grandchildren Jillian, Tommy, Olivia and Ben. Niece Mandi White, her husband, Jeremy. Nephew Marty Coleman and his wife, Katelyn. Please make contributions in place of flowers to the memory of Peter to the Alzheimer's Association Minnesota-North Dakota Chapter at www.alz.org/mnnd. A Celebration of Life will be held at 11 am, April 9th, 2022, at Brackett's Crossing Country Club in Lakeville, Minnesota.

Beloved Husband, Father and Grandfather, Peter Martin, 74, of Alva, Florida, passed away on March 20th, 2022. His loss was completely unexpected, and the family is shocked and deeply saddened. On July 31st, 1947, Peter was born to James and... View Obituary & Service Information

The family of Peter Franklin Martin created this Life Tributes page to make it easy to share your memories.

Send flowers to the Martin family.