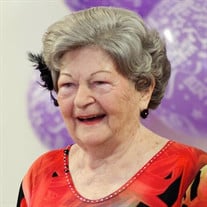 Priscilla Dooley Baker, age 96, of Bolton Connecticut and Sarasota Florida, passed away peacefully in her sleep on 3 October 2021, only a few days shy of her 97th birthday. Pat, as she was known to everyone, had lived a long and eventful life. Pat was born on 9 October 1924 to Grace and Leon Brock in Biddeford, Maine. As a young woman, she studied Mathematics & Engineering at the University of New Hampshire, and also worked at GE Aviation and participated in the local Civil Air Patrol during WWII. In 1946 she married Philip G. Dooley, after his return from serving with the US Army in Europe. The young couple went on to have five children: Susan, Philip Jr., Christine, Kathleen, and Jonathan. In 1950 Pat and Phil moved to Bolton, Connecticut where they would raise their growing family. Pat threw her full energy into the challenges of raising five children, as well as being active in local affairs, community groups, and doing volunteer work at Manchester Memorial Hospital. At the same time, she hosted a stream of visitors from many lands, mainly through the organization 'Experiment in International Living.' This was one of her inventive ways of broadening her children’s horizons. Pat was predeceased by her husband Philip Dooley in 1988. She then turned her considerable energy and determination to making her own way as a widow, renting out rooms and working several jobs to maintain home and family. In 1996 Pat embarked on a second long and happy marriage with Harrol (Bill) Baker. As newlyweds in their 70s, and throughout their marriage, Pat and Bill enjoyed traveling. Tiring of cold Connecticut winters, Bill and Pat became snowbirds, regularly wintering at Venetian Park Estates in Sarasota, Florida. They made many friends there. Bill predeceased Pat in 2019. Pat was also predeceased by her younger sister, Celia Brock Conrad. Pat is survived by five children, seven grandchildren and four great-grandchildren. The family requests that, in lieu of flowers, donations in Pat's memory can be made to Tidewell Hospice of Sarasota (https://tidewellhospice.org/home/) or to the Experiment in International Living (https://www.experiment.org/). The family will plan a memorial service/celebration of life, at a time and place still to be determined.

Priscilla Dooley Baker, age 96, of Bolton Connecticut and Sarasota Florida, passed away peacefully in her sleep on 3 October 2021, only a few days shy of her 97th birthday. Pat, as she was known to everyone, had lived a long and eventful life. Pat... View Obituary & Service Information

The family of Priscilla Dooley Baker created this Life Tributes page to make it easy to share your memories.

Send flowers to the Baker family.