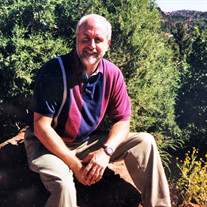 Richard Paul Boyd unexpectedly passed away on November 8, 2021. The medical team worked 44 minutes trying to revive him. Even in the brief hours with his doctors they realized what a fine man Richard was. The sorrow and shock felt by the... View Obituary & Service Information

The family of Richard Boyd created this Life Tributes page to make it easy to share your memories.

Send flowers to the Boyd family.