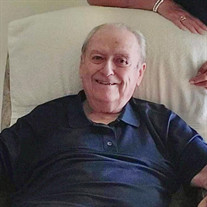 Robert D. Bellerose, 83, of Naples, Florida, passed away October 26, 2021 in Lakewood Ranch while visiting family.  He was born October 19, 1938 in Biddeford, Maine to the late Conrad and Florida (Pomeleau) Bellerose.   As a young man, Robert enjoyed playing basketball, but his life-long passion was golf. He served in the US Air Force Reserves. He was the owner of a North American Sales Agency, representing a British paper company. He and his wife Carolyn, were snowbirds to Naples since the early 80’s and moved to Naples permanently from Wilbraham, Massachusetts in 2002.  He was Catholic, and a member of the Countryside Country Club in Naples.  Robert loved music, singing, drumming and was quite a good dancer, even in his older years.  In his 70’s, Robert took his musical talents to the studio and recorded several cds.   Robert was a kind man, he loved his wife and family and never met a stranger.  He always helped and encouraged others. He was generous to all with his time and money.  Left to cherish his memory are his wife of 62 years, Carolyn; daughter, Vicky Fichtner and her husband Chuck; son, John Bellerose and his wife Helen; grandchildren, Robert and his wife Francine; David, Daniel and his wife Rachel; Lindsay, Melinda and her husband Bob; Lisa and her husband Caleb; Hans and his wife Maddie; and Kurt and his wife Hannah; great grandchildren, Devin, Skyla, Gemma, Sarah, Chloe, Elijah, Baby girl on the way, Matthias, Bella, Sebastian and Nathanael.   Service will be private.  Memorial contributions may be made in Robert’s honor to St. Judes Hospital for Children’s research at www.StJude.org.  Memories and condolences may be left online at www.MFHcares.com.

Robert D. Bellerose, 83, of Naples, Florida, passed away October 26, 2021 in Lakewood Ranch while visiting family.  He was born October 19, 1938 in Biddeford, Maine to the late Conrad and Florida (Pomeleau) Bellerose.   As a young man, Robert... View Obituary & Service Information

The family of Robert D. Bellerose created this Life Tributes page to make it easy to share your memories.

Send flowers to the Bellerose family.