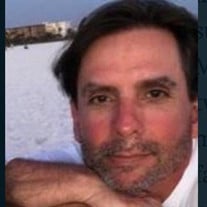 Robert Lee Moench Dec 5, 1961 - Dec 15, 2020 It is with great sadness that the family of Robert Lee Moench announces his passing on December 15, 2020, at the age of 59 in Sarasota, FL after a courageous battle with cancer. He is survived by his partner in life and best friend, Michelle Mitchell; his four children, Amber, Aaron Sean, and Ashly; two step-children, Shelby and Nathan; 9 grandchildren; his mother, Carol Ives; his brothers Dave, Ken and Darol and their families. He was preceded in death by his daughter, Cara, and his father, Richard Moench. Bob spent most of his adult life working in the retail automotive industry in the Sarasota area. Most recently he spent his time "taking care of his baby" meaning running the household from end to end for his family. He lived life on his own terms – he was a free spirit who enjoyed the simple things in life including good music, especially the Beatles who he believed were the most influential band of all time. He enjoyed boating and loved playing golf. Bob also loved a great beer, especially when paired with football and friends. He knew how he wanted to spend his remaining time, with family and friends. He was able to do just that with a trip to the mountains and an RV excursion. He also spent quality time with his immediate family including his mother, his brothers, his children, and most of his grandchildren. His friends both near and far came to visit or connected even more deeply through social media. Bob was known to post daily inspiration for others even as he faced his darkest days. Despite his illness, 2020 brought him joy as he reveled in watching our Tampa Bay Ray's play in the World Series, cheered on the Lighting as they brought home the Stanley Cup, and seeing the results of our 2020 election unfold. He was a man of strong faith, saying his faith required nothing from God and he knew God's will and purpose would be done. His kind and giving heart were evident by all who knew him including animals. He was sometimes referred to as the animal whisperer. His cat, Ponyo, laid by his side even after his passing. Baby, when that fog horn blows I'll be coming home. Services will be announced at a later date. In lieu of flowers please honor his memory by donating to Lauren's One Wish Foundation. Lauren's family works hard to fulfill Lauren's dream of helping children fighting cancer right here in Sarasota. www.laurensonewish.org or checks to Lauren's One Wish 4731 E. Trails Dr. Sarasota, Fl. 34232 To Plant Memorial Trees in memory, please visit our Sympathy Store.

Robert Lee Moench Dec 5, 1961 - Dec 15, 2020 It is with great sadness that the family of Robert Lee Moench announces his passing on December 15, 2020, at the age of 59 in Sarasota, FL after a courageous battle with cancer. He is survived by... View Obituary & Service Information

The family of Robert Lee Moench created this Life Tributes page to make it easy to share your memories.

Send flowers to the Moench family.