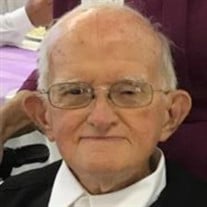 Roman D. Schlabach, 94, of Sarasota, FL went to his eternal home on January 25, 2021 with his loving wife & family at his side. He was formally of Seney, Michigan. Roman was born to the late Daniel & Mary (Beachy) Schlabach on October 3, 1926 in Ohio. On March 5, 1960, he was married to Fannie Sommers, the daughter of the late Wallace & Ada Sommers. Roman was ordained a deacon in 1965 at Bethany Conservative Mennonite Church in Holmesville, Ohio. In 1968 they moved to Seney, MI to help with Seney Mennonite Church. Seney was home until 2018 when they became fulltime residents in Sarasota, FL and became members of Sarasota Mennonite Church. Roman was very diversified in his occupations. As a youth he worked on the farm and repaired small engines. In Ohio he owned Fryburg Builders. In Seney, MI he Owned and operated “Seney IGA and the Golden Grill Restaurant.” He will be greatly missed by his wife, Fannie, and their 7 children, Elijah (Marcella) Schlabach of Seney, MI, Matthew (Loretta) Schlabach of Wakarusa, IN, Christy Schlabach of Sarasota, Fl, Mark Schlabach, of Sarasota FL, Luke (Martina) Schlabach of Columbus, NC, Ruth (Dale) Russell, of Sarasota FL, John (Sharon) Schlabach of Myakka City, FL, 19 grandchildren and 21 great grandchildren, one brother, Manelius (Katie) Schlabach of Millersburg, OH. In addition to his parents, he is preceded in death by a daughter-in-law, Regina R Schlabach, and 6 siblings, Aaron, Eli, John, Sarah, Fannie, Daniel. Funeral Services will be held on Saturday, January 30, 2021 at 10:00 AM, at Sarasota Mennonite Church. Burial following at Sunnyside Mennonite Cemetery. Attire: Feel free to wear colors of celebration. In lieu of flowers Roman has requested that donations be made to Mennonite Air Missions, c/o Amos Hurst Jr., 140 Rothsville Station Rd., Lititz, PA 17543. This mission has always been close to his heart. Memories and condolences may be left online at www.MaloneyFuneralHomeCares.com.

Roman D. Schlabach, 94, of Sarasota, FL went to his eternal home on January 25, 2021 with his loving wife & family at his side. He was formally of Seney, Michigan. Roman was born to the late Daniel & Mary (Beachy) Schlabach on October 3, 1926... View Obituary & Service Information

The family of Roman D Schlabach created this Life Tributes page to make it easy to share your memories.

Send flowers to the Schlabach family.