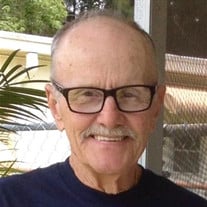 Ronald Robert Kovalsky Sr., 80, passed away peacefully at his home in Wesley Chapel, FL with family by his side on April 30, 2021 after a long battle with cancer. He was born June 18, 1940 in Nyack, New York to the late Vincent and Ann (Cayot) Kovalsky. Ron served in the Marine Corps before beginning his roofing career in the state of New York in 1964 In the early 70s, he moved his family to Florida, where he continued his craft for nearly 50 years. Ron was a very active and accomplished man with many hobbies he was passionate for, such as weightlifting and body building, sports, boating, gardening, and spending time with friends and family. He took his body building to an elite level and competed in the Mr. Sarasota Contest. He left his mark on earth with many accomplishments of his own and pride in his heart for the achievements of his loved ones. He was an intelligent man of few words, who would much rather show you than tell you. He lived by the Marine Corp motto: “Ductus Exemplo” Latin for “lead by example”. He was known as a man of solid fortitude, with his hard-working and tenacious spirit, he led his tribe by example. He will be deeply missed by his family, friends, and all who knew him. Left to cherish his memory are his wife of 33 years, Annie; Children: Ron Kovalsky Jr. and his wife Sandie; Vickie McCord and her husband Rusty; Michelle Douglas and her fiancé Aaron; Kevin Kovalsky; Lisa Eichelberger and her husband Randy; Robert Ayers; Daniel Ayers and his wife Maricar; Michael Ayers and his wife Jennifer; Doreen Cohenour and her boyfriend Mike; and Laura Wigglesworth and her husband Shawn; Grandchildren: Heather, Rusty (Jen), Steven (Ashley), Jessica (Scott), Alisha (Thomas), Ronnie III, Tiffany, Nicole, Anthony, James, Diana (Chad), Randy, Steven (Amy), Austin, Deonna, Daniel, Dylan, Delila, Daniella, Caleb, Emilee and Camryn; Great Grandchildren: Taylor, Wesley, Russell, Colton, Owen, Ryleigh, Chase, Eric, Emma, Lexi, Levi, Thomas, Madison, Allie, Aaliyah, Kiera, Taylin, Aidyn, Christian, Aurora, Felix and Luna. He was preceded in death by his granddaughter Tabitha Nicole Peters. There will be a visitation on Monday, May 17, 2021 from 5:30pm to 7:30pm at Maloney Funeral Home, 2401 Cattlemen Road, Sarasota, Florida 34232. Funeral will begin at 7:30pm. Interment with military honors will be Tuesday, May 18, 2021 at 2:00pm at Sarasota National Cemetery, 9810 SR 72, Sarasota, Florida 34241. Memorial contributions may be made to Moffitt Cancer Center at www.moffitt.org or Season’s Hospice at www.seasonshospice.org. Memories and condolences may be left online at www.MFHcares.com

Ronald Robert Kovalsky Sr., 80, passed away peacefully at his home in Wesley Chapel, FL with family by his side on April 30, 2021 after a long battle with cancer. He was born June 18, 1940 in Nyack, New York to the late Vincent and Ann (Cayot)... View Obituary & Service Information

The family of Ronald Robert Kovalsky Sr. created this Life Tributes page to make it easy to share your memories.

Ronald Robert Kovalsky Sr., 80, passed away peacefully at his...

Send flowers to the Kovalsky family.