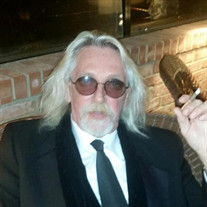 Steven Howard Cundiff (widely-known as Doc), died on January 15, 2021 at the age of 70. Doc was preceded in death by his son, Kevin Cundiff and sister Kim Cowgell. He leaves behind his loving wife Gay Denise Covell; mother June Cowgell; children Steven Brent Cundiff (Mai Murjan Cundiff), Rebekah Van Meter (David Jeffries), Joshua Cundiff (Katrina Cundiff), Justin Cundiff (Sara Cundiff), Aliza Rose Zagorianos (George Zagorianos), Jessie Cundiff (Madeline Palmer); his son-in-law Jason Covell (Sybil Covell); 12 grandchildren who adored him, and numerous friends from near and far. His dogs Otis, Peanut, and BoBo, and cats Butch and Henry will miss his attention and bounty of snacks. Doc lived an interesting and exciting life full of adventures. He had endless stories to tell and was always ready to tell them. His most famous saying was “Let your love be as deep as your pain.” Doc was born on August 17, 1950 in Hillsboro, Ohio. After graduating from high school Doc joined the US Army. He served in the Vietnam war until he was wounded and returned to the United States with a Purple Heart. Then he joined the East Fork School of Music and Candlemakers commune near Williamsburg, Ohio. Doc was the lead singer and guitar player for bands since his youth. The friendships he made and the comradrie with other musicians brought much joy to his life. Among his most cherished memories was of being one of the first street musicians on Chestnut St in Philadelphia during the 1976 Bicentennial. Through this experience he met people from all walks of life and swapped stories and philosophies. Doc opened for some famous bands such as George Thoroughgood, the Gin Blossoms, and 38 Special at the WEBN fireworks. The most recent band, which he founded and led after returning to Ohio from Philadelphia, was called Fire & Ice. Bill Miller and Jeff Bonta were consistent members but many other local musicians joined in to play rock&roll, the blues and a touch of country. Fire and Ice had many gigs in West Chester, Ohio and the surrounding communities, with Gay always there to make videos and give enthusiastic support. Doc lived in West Chester after he met Gay. They moved to Sarasota, Florida in March and remained there until his death. The family is grateful to Tidewell Hospice for their support and assistance in Doc’s final days. He was cremated as was his wish. No memorial has been scheduled at this time. If desired, donations in his name can be made to Wounded Warriors at support.woundedwarriorproject.org

The family of Steven Howard Cundiff created this Life Tributes page to make it easy to share your memories.

Send flowers to the Cundiff family.