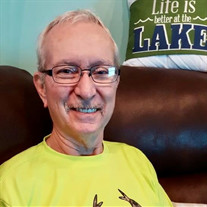 Terry Lynn Lantow, 75, passed away May 1, 2022 at Manatee Memorial Hospital in Bradenton, FL.  He was born June 16, 1946 in Defiance, Ohio to the late Henry and Dorothy Lantow. Terry married his beautiful bride, Jean Irene "McCague" on July 4, 1964. Terry retired after 47 years working as a Millwright at General Motors Central Foundry.  He was a member of St. John's Lutheran Church in Defiance, Ohio, Moose Lodge 2094, AMVETS Post 1991, and UAW Post 211.  He and his wife Jean have been snowbirds traveling between Defiance, Ohio and Palmetto, Florida since 2012.  He enjoyed reading westerns, watching the History Chanel, hunting trips, fishing, four wheeling, shooting his gun for target practice, and teaching his grandchildren all those things.  He loved spending time with his family in their pontoon boat on the lake and traveling the country.   Left to cherish his memory are his wife of 57 years, Jean; daughter, Jody Hohman and her husband Randy; grandchildren, Kirstie Mack and her husband Shaun; and Dalton Hall and his wife Ashlee; great grandchildren, Kyan, Mia, Sadie and one on the way! In addition to his parents, Terry was predeceased by his sister Rebecca; nephew Scotty and "brothers" from his days working at the foundry.  There will be a Celebration of Life service to be announced soon and held in Defiance, Ohio.   Memorial contributions may be made to the Motts Children’s Hospital online at www.mottchildren.org/giving/ways-to-give.  Memories and condolences may be left for the family at www.MFHcares.com  Terry never met a stranger and could talk to anyone.  He impacted so many people throughout his life with his kindness.  He will be greatly missed by all who knew him, especially his dear family who he loved greatly.

The family of Terry Lynn Lantow created this Life Tributes page to make it easy to share your memories.

Send flowers to the Lantow family.